We are exhibiting 3 Exhibitions in Holland then London and later this year in Belgium.

Showcomms will be exhibiting at 3 exhibitions this year starting the first week of June.

Posted by Showcomms at 16:22
Email ThisBlogThis!Share to TwitterShare to FacebookShare to Pinterest

What a Journey so far!

I was up early this morning, Saturday 19th May 2012, to watch the start of the Olympic Torch relay on television.   The man  from the TST (Torch Security Team) who lit the torch for the first leg of the relay was wearing a Showcomms Acoustic Tube Earpiece (BG-F-Tetra one wire headset).


The Our journey began about 8 years ago when a Policeman on the first roll out of Tetra Radios in the UK called and asked me if I could get him a headset for his new radio.  His issued headset was no good and he wanted one like the one he had seen on Showcomms website, one like they used on TV!

If you had said to me then that this same headset would be used by The International Criminal Court, Nato, Belgium Police Forces, Parts of the The Highways Agency, Dartford River Crossing, Westminster City Council, Kent Count Council, Transport for London and that I would be watching out for them on TV for the 2012 Olympic Torch Relay I would never have believed you!

What a journey so far!
Thank you all customers and colleagues both past and present!
Posted by Showcomms at 09:54
Email ThisBlogThis!Share to TwitterShare to FacebookShare to Pinterest

I have received comments from as far afield as Manchester that I have not posted anything on our blog recently.  I shall make amends and start now with a brief summary of what is occurring.
The Olympics have been a important feature of April and May orders. We were very pleased to receive an order from London 2012 for 68 MkII Voicevests (shown below).The Voicevests were delivered to the Venues Team for May 2nd and are already in use. Father and son were in over most of the May Day bank holiday charging and testing all the Voicevests. 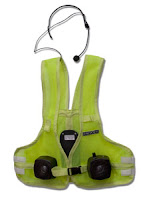 The Voicevest has been popular with the train operating companies at key mainline stations (Reading, Bristol and Cardiff for example) during large events. They can also be seen previously in operation on The London Marathon and International Test matches in the UK.  The Voicevest offers a portable hands free PA system for broadcasting information clearly to crowds and queues at Events.  It is also used as part of Fire Evacuation Procedures in large building such as One Churchill Place, Canary Wharf. 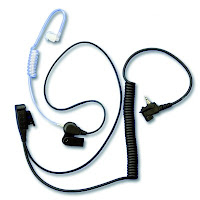 Our second Olympic order was for a large quantity of 1 wire earpiece Police headset (BG-F-Tetra) direct to New Scotland yard for their Torch Procession Team.  Yes I will be shouting Look there is one of our earpieces in shot every time I see someone running alongside the torch holder with an acoustic tube on the news. I only wish I could have put huge branded labels on them  as they will no doubt be on the news around the world!
Posted by Showcomms at 18:18
Email ThisBlogThis!Share to TwitterShare to FacebookShare to Pinterest
Newer Posts Older Posts Home
Subscribe to: Posts (Atom)