The Barbican Centre have been investigating different solutions to replace their BTR wireless Beltpack system in the main hall.  Today we tested a Kenwoood Nexedge Digital Base station with some dual mode Digital/Analogue capable radios.  The base had the required Tx enable button and audio in and audio out on a trial version interface panel.    The radio system was interfaced to the backstage RTS 2 wire intercom using an RTS 2 wire to 4 wire interface. 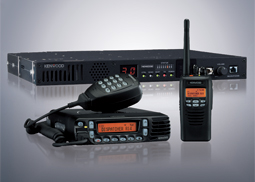 The Nexedge radio system was operating in 6.25khz bandwidth offering a possible saving in licence cost as opposed to the normal 12.5kHz OFCOM/JFMG licence.  There was some work to do on the interface to improve the audio levels and litlle of noise however overall it was better than Bruce expected and it was nice to not have that background noise present on Production Radio Talkback. There is a delay, albeit very small, and the infinite echo of an open radio through an open mic in production sounded like a not longer clean feed coming back to some poor presenter's IFB earpiece from a remote studio, studio, studio ,studio, studio (I guess you get the drift)!

This was the first Digital radio talkback system Showcomms and Bruce had tested as runner for a possible replacement to the present analogue UHF base stations.  The clear improvement in range running 5W through some little mag mounts was the biggest surprise. Certainly the in-house production team were impressed by the lack of black spots. If you have been to the Barbican you will know it is a concrete steel jungle and good rf coverage from backstage to FOH foyet and upper levels can be a struggle.

In short the Benefits appear to be:
A little work is required on our interface box  to the Kenwood Nexedge 810 and certainly it wont be long before Bruce can bring anyone who wishes a demo unit to try out!
Posted by Showcomms at 18:55
Email ThisBlogThis!Share to TwitterShare to FacebookShare to Pinterest
Labels: Kenwood, RTS, Theatre communications

Come and meet us in London Brussels and the Hague

I have been busy organising some new exhibition dates including one in London and one in both Brussels and The Hague.

London 29th September 2011 - ADS 3rd PSE one day event.
Invitations to attend as a visitor are extended only to officers of the police service, Home Office, HM Revenue and Customs, UK Border Agency, SOCA and the prison services, as well as other relevant government departments.
We would like to meet as many of our customers as possible. To attend  as a visitor please follow the below link and complete a registration form.

The Hague  24th November  - UKTI Benelux Security and Defence Roadshow
Location The British Ambassador’s Residence. This is our first visit to The Netherlands and I promise to bring as many new products as possible with me!


Both of these events are by invitation only. Please contact me if you would like to receive an invitation for either of the European events.
bruce@showcomms.co.uk
Posted by Showcomms at 14:26
Email ThisBlogThis!Share to TwitterShare to FacebookShare to Pinterest 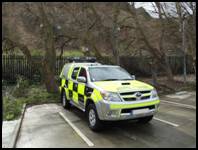 In June 2011 we supplied a range of products including Peter Jones Klickfast accessories, Lowe Headsets and Sepura branded Chargers to be used as part of the communications solution for the Welsh Government’s Traffic Officer service on the A55
Posted by Showcomms at 17:20
Email ThisBlogThis!Share to TwitterShare to FacebookShare to Pinterest
Labels: KlickFast, Sepura

At the end of May (2011) we made our second visit to the Infopol exhibition.
Westerlo, a Province of Antwerp and Lokale Police Zuiderkempen was the first Force to place it's order for Nokia THR 880i headsets following the show.

A new Nokia covert headset based on the popular TC4 headset has been designed based on the  suggestions of a team from the VSSE who visited us at the exhibition. The new headset has minimal cable with a BG style PTT mic and a short lead to a 3.5mm jack socket allowing quick change of leads from Covert Wireless to Acoustic Tube Earpiece.
Posted by Showcomms at 08:12
Email ThisBlogThis!Share to TwitterShare to FacebookShare to Pinterest
Labels: Infopol, THR880i

Showcomms owner Bruce Cocks, who was born in Tonbridge, Kent and lived most of his life in the county, was very pleased to recently receive an order for 19 BG-F headsets for Motorola MTH800 Tetra radios from Kent County for their Emergency Planning Unit.

"Our headsets are worn all over Europe and further afield. Our headsets have been purchased by several International bodies including part of the UN.
"I travel a lot in Belgium and every town is always proudly flying their local and; regional flags so there is always something special in receiving an order from your own local region."

Posted by Showcomms at 15:47
Email ThisBlogThis!Share to TwitterShare to FacebookShare to Pinterest
Labels: MTH800, Tetra

180 Headsets for use with the Sepura STP8000 radio

We have provided 180 headsets with earpiece and PTT microphone to Amey the Oxford based support services company.

Amey  maintains more than 650 miles of road in area 9;


including one of the busiest stretches of motorway in the UK – the M6 through Birmingham.


It is one area achieved, 13 more areas to go!
Posted by Showcomms at 15:25
Email ThisBlogThis!Share to TwitterShare to FacebookShare to Pinterest
Labels: STP8000

April 2011 has seen a succession of Transport Industry related orders
Our new Sales Adminstrator,  Amanda Yangin, has been busy sending orders all over the UK and Europe

Showcomms will be in Europe on 23rd, 24th and 25th May at Infopol Belgium 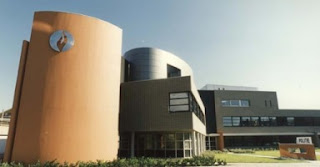 Showcomms will be exhibiting at Infopol in Belgium in May 2011.
Posted by Showcomms at 19:00
Email ThisBlogThis!Share to TwitterShare to FacebookShare to Pinterest
Labels: EADS, THR880i

London's celebrated Savoy Hotel recently placed an order for our new headsets to use with their Star Trek name badge wireless communication system made by Vocera.

If a concierge wants to get in touch with a colleague somewhere in the Savoy Hotel they simply say the name of their colleague into their lapel microphone and a specially-developed voice recognition system immediately connects them to their colleague.
Posted by Showcomms at 18:43
Email ThisBlogThis!Share to TwitterShare to FacebookShare to Pinterest
Labels: covert earpieces, industry, Security, Wireless

Sunshine again and everyone is beaming.
John Bishop has started the 2nd leg of his Stand Up tour Sunshine Tour around the UK. Showcomms are providing backstage radio comms following a successful hire last year

12 New Motorola CP040 radios and a Kenwood Base Station with constant carrier will provide 4 simplex and 1 duplex feed.  The licences were booked via JFMG's online system and we were able to co-ordinate the same frequencies at all the venues for continuity of use.
Posted by Showcomms at 18:28
Email ThisBlogThis!Share to TwitterShare to FacebookShare to Pinterest
Labels: Kenwood, Motorola, Radio hire
Newer Posts Older Posts Home
Subscribe to: Posts (Atom)